Men: Losing a Child to Abortion 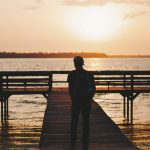 Much attention is focused on the impact an abortion has on a woman. Yet whenever there is a pregnancy, there is a man involved. Yes, there are cases where the man is not even made aware of the fact that a pregnancy has occurred. There are certainly men who want to have nothing to do with the outcome of their partner’s pregnancy. Yet, more often than not the man is aware and involved, at least to some extent, in the pregnancy decision.

It may be shortly after the event, or even years later; however, in the same way that women may react with regret, sadness, anger after an abortion, the man, too, can experience emotional, psychological, and spiritual responses. In some cases, these even manifest themselves physically.

More and more, men are being encouraged to share their abortion experience.

Fatherhood Aborted, written in 2001 by Guy Condon and David Hazard, explores the post-abortion experience from the man’s perspective. On page 73, the authors write: “Inside the heart of every abortive father is a deep sense of grief because he knows he gave up a relationship with a unique person who was part of him.”

“As Ricardo shares, ‘Every year on the anniversary of the abortion I experience a terrible pain inside—thinking about the life that was lost. The home runs that will never be hit. Or the dance recitals that will never be. The contribution to this world that’s lost—maybe in medicine or some other human service. It’s an ache in me.’”

In a special report  for the Elliot Institute, Dr. Catherine Coyle , Ph.D., wrote an article entitled: Post-Abortion Trauma in Men Still Overlooked. In it she states: “The few published studies concerning men suggest that, like women, men may experience grief,1 anxiety, guilt, helplessness,2 and anger.3 The fact that men tend to repress their emotions may also make it more difficult for them to resolve their grief.4 Even men who support their partners’ abortion may experience ambivalent feelings such as relief along with anxiety, anguish, grief, and guilt.5 About half of the men interviewed by these authors reported that one year after the abortion occurred, they still had frequent (monthly) thoughts about it.6”

In the same special report, David C. Reardon, Ph.D. submits this article: Forgotten Fathers and Their Unforgettable Children. Reardon observes, “Men have reported a large number of problems that they claim were a direct result of their abortion experience. These include broken relationships, sexual dysfunction, substance abuse, self-hate, risk taking and suicidal behavior, increasing feelings of grief over time, feelings of helplessness, guilt, depression, greater tendencies toward becoming angry and violent, and feelings connected to a sense of lost manhood.4”

If you are a man who has been touched by abortion and is experiencing any of these hurtful responses, it’s possible that Father’s Day will trigger painful reflections. We want to offer to you the assistance and support you need.

Restore After Abortion is for men as well as for women for whom the lingering effects of abortion continue to cause pain. Restore provides free confidential post-abortion care and support services to all individuals after abortion experiences. Restore After Abortion serves DuPage County, Illinois and surrounding communities. Please call today for a free, confidential consultation.